Four On A Couch

Name of Group Game: Four On A Couch
*Special thanks to Chris Chu for providing the group game idea
Type:

Four On A Couch Set-up: 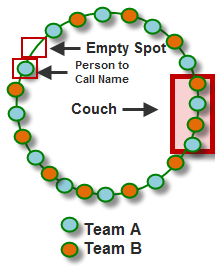 Goal: Try to get four of your teammates on the couch!

Preparation:
– Four marked chairs or a “couch” that can fit four people. Four people must sit on the couch at the beginning of the game. Everyone else can sit on the ground in a circle or in unmarked chairs, with the outer circle boundary including the four special chairs/”couch”.
– One piece of paper for every participant and pens
– A bag to collect the pieces of paper

How to Play Four On A Couch:
1. Split everyone into two equal teams and ask them to sit in a circle. Add one empty seat in the circle. When starting, each participant needs to sit next to his/her opponent on both sides (alternating team members), including the four people on the “couch”. Hand out the pieces of paper and pens (one per person). Ask everyone to write their names on their piece of paper and to put their pieces of paper in the bag.

4. Start by asking the person to the right of the empty chair to call a name. The person with the piece of paper with the written name sits in the empty chair. Continue this pattern. The first team to have four of their members on the couch wins the game.

You May Also Enjoy:
Everybody’s It – Line Tag – Freeze Tag

To add this game to your website or blog, just copy and paste the following URL: https://www.greatgroupgames.com/four-on-a-couch.htm